As husband-man and I have returned to South Africa we’ve begun thinking about where we want to root ourselves and how the space we choose to be in might best reflect our desire to love our neighbors well, to be part of reconciliation in this beautiful land, to rebuild and repair. As we’ve begun to speak about where we might land, I have been profoundly struck by how our society still reflects the history of our country.

So much of South Africa’s neighborhoods are still sharply racially and class segregated and this is no wonder. Apartheid was in large part upheld by the spatial engineering of physical space and geographies. Land was zoned according to ethnicity/race and groups were assigned demarcated areas to live in. Buffer zones of natural landscape features and man-made infrastructure were employed as physical barriers to keep people apart. Transportation, electricity, and water infrastructure as well as centers of commerce were by extension inaccessible to many persons of color who were often assigned land on the very outskirts of cities/towns.

In South Africa, we don’t have metaphorical walls keeping us separate and disconnected; we have physical demarcations of division. Train lines, roads, rivers, mountains, and scrubland are still the tangible expressions and reproductions of our separation.

Apartheid was not only a political, legal and economic dispensation – it was a spatial dispensation.

The inequitable distribution of resources, services and access in South African communities is still largely one of the physical legacies of apartheid.  As Edward Soja puts it, justice has a geography. Injustice is graphically manifested. Our spaces remain imbued with the remnants of the historical project, with power and with privilege or with the lack of both. We are positioned and continue to re-position in ways that reproduce and reinforce inequality.

How can we begin asking the hard questions about the socio-spatial distributions of wants and needs in our cities – access to job opportunities, to health care, to good air quality? How might we begin to recognize that the morality of place and physicality of space – accessibility, walkability, transport equity – is not solely the mandate of government; it is the explicit remit of the church.

“Seek the peace of the city where I have sent you.” Jeremiah 29:7. The peace that is required here is shalom. Not merely the absence of conflict but the flourishing of life.  From the dust of the land we were created and to the dust of the land we will return. Our beginning and end is with the earth, place, space. The use of land not only reflects equitableness, but our relationship to it imbues our sense of placement, home, rootedness, safety, flourishing, and survival. “In whose image is space created?” asks David Harvey. Does space in South Africa reflect the image of God reconciling mankind to one another? Is the Kingdom reflected on earth; is “thy will be done” mirrored back to heaven? Does place and space reflect our shalom imperative?

If our separateness had such an intentionality and physicality behind its formation, then surely our reconciliation has to be both intentional and physical. We cannot be content with merely reaching over the invisible walls; we have to begin crossing the visible streets. What are the tangible ways we can spatially re-engineer our lives to create geographies of justice? How would we tread if we really believed that this ground, the ground, is holy ground?

Husband-man and I we are wrestling with whether breaking down the physical demarcations of our division might mean moving in to the places we’re still socially (if no longer legally) not supposed to be in.

Let’s take off our shoes, and walk as though we believe in the sacredness of place. 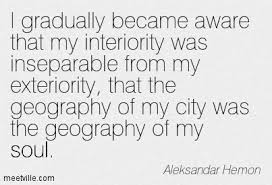 4 thoughts on “on the Geography of Justice”